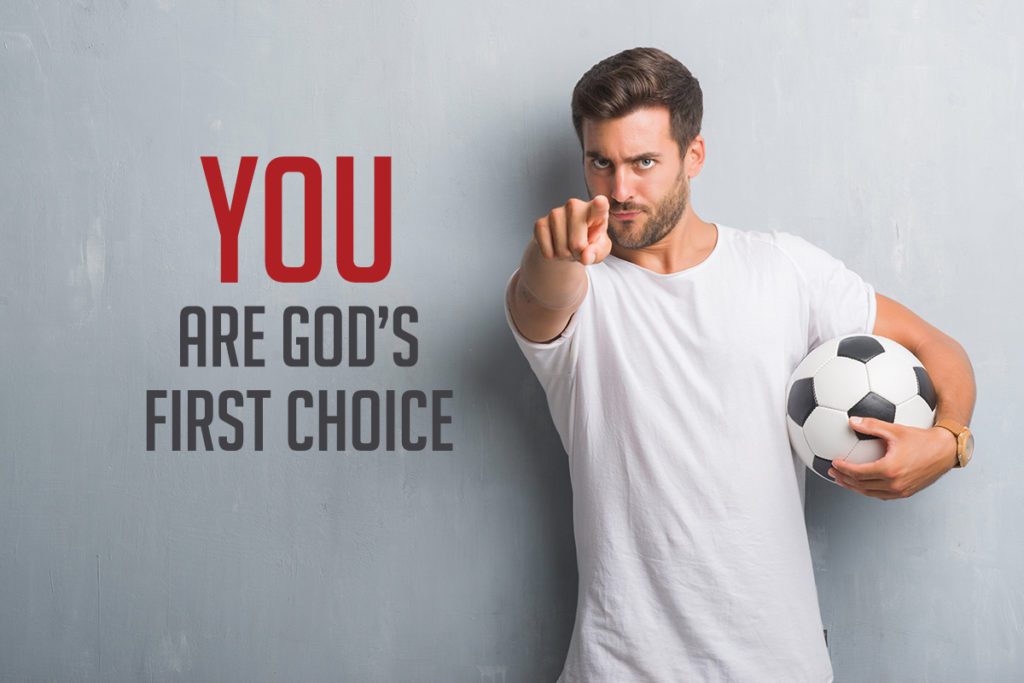 PrevPreviousConsider Others
NextWith God All Things Are PossibleNext

You Are God’s First Choice!

Did you know that you were God’s first choice? Many times it seems like we are the very last to be chosen and useless for a particular task. However, in God’s eyes you are His first choice for what He has created you to do!

“You did not choose Me, but I chose you and appointed you that you should go and bear fruit…”

Imagine a group of children at school in their physical fitness class. The teacher designates two team captains. They take turns choosing members of their teams from the pool of remaining students. Jack and Jill are the last children to be picked. Jack is a stocky boy who wears glasses. He is the boy who runs the slowest, so no one wants him to be on their team, as they want children who are fast. Jill is the shortest girl in class and has a reputation for being clumsy. It seems that she is always tripping over her own feet. A girl who will be falling down all the time is no one’s first choice!

Jack is left feeling that he is simply too slow and too heavy. He feels that he isn’t strong enough to help his teammates win. Jill feels useless and unwanted. Her legs are too little for speed, and she’s too clumsy to get very far without falling or running into someone else. They feel disliked, worthless and unusable.

Is it any wonder that with those emotions and negative perceptions of their own value that Jack and Jill fail to perform well during the game?

You Are God’s First Choice

Just like those children on the sports field, we are all available to be chosen for God’s team. Many of us have those same inaccurate views of value that Jack and Jill had. We are intimately acquainted with our faults and weaknesses, which many times are “confirmed” through our interactions with others. This can lead us to feeling that we are unworthy to be used by God. We think that there is only one path to the success of a believer, like working in the ministry, and when that doesn’t fit our passions or giftings, we feel that we are disqualified to be a valuable member of His team!

However, when God is picking teammates, we are all His first choice for whatever individual plan He has in store for us!

God picked us to be successes—to bear fruit. He hasn’t created anyone useless yet, and He didn’t start with you! At the end of the day, He hasn’t chosen us because of our accolades, experience, charismatic personalities, or great lists of accomplishments. He chose us before the foundation of the world, and we are made in His image (Ephesians 1:4; Genesis 1:26).

Although our flesh remains weak at times, when we are born again our spirits become brand new and reflect Jesus’ perfection. He sees us differently than the way we see ourselves and the way the world may see us. 1 Samuel 16:7 says, “…the Lord does not see as man sees; for man looks at the outward appearance, but the Lord looks at the heart.”

When we examine ourselves only according to our flesh, we not only miss seeing who God sees, but we can also miss out on the process of being conformed into His image (Romans 8:29). Fleshly, or natural, characteristics could include our appearance, talents, abilities, experience, personality, intellect—or the lack thereof! Yet, as we examine the great heroes of the Bible like Abraham, Joseph, Moses, King David, Gideon, Peter and Paul (just to name a few), we discover a collection of misfits, rejects, weaklings, cowards and failures!

We do not have to do everything perfectly for God to use us in mighty ways!

Abraham gave his wife away—twice. Joseph shared his visions with his family (probably not the wisest of decisions), which resulted in him being rejected by his brothers and sold into slavery. Moses was a murderer. David was the runt of the litter in his family, the youngest brother who was least respected. Gideon was a coward who was chosen by God while hiding in a wine press threshing wheat. Peter had chronic foot-in-mouth disease and denied Christ three times. Paul persecuted many of the earliest Christian believers, including the first martyr, Stephen.

God Can Use You, Too!

Are you feeling better about yourselves, yet? If God can use this group, He can use you, too! God doesn’t see our mistakes, He sees our potential! When He looks at us, He doesn’t see who we are in the natural; He sees who He created us to be. He has plans for us that do not change simply because we mess things up sometimes.

God’s Choice Is the Best Choice

So, let’s revisit our seemingly weak and last-to-be-chosen children, Jack and Jill. Although he didn’t perform well on the sports field, Jack had been created with an incredible intellect. He became captain of the school’s chess club and went on to win a national championship title. Later, he became an Ivy League university Physics professor and award-winning author. God transformed a shy, introverted boy into a great communicator and sent him out to share the Gospel with hundreds in academia and the sciences.

Jill certainly wasn’t created to be an athlete! Yet, God had given her a passion for music. As she learned who God had made her to be, she pursued music, dedicated herself to honing her craft (although she was no prodigy—she had to develop her skills through hard work and trust in God’s ability in her) and worked her way up through the ranks of a prestigious Orchestra. She found favor in the eyes of people in leadership, which opened doors to many close relationships with men and women of influence. Through those opportunities, she was able to share the love of Jesus with people who never would have darkened the door of a church! Have you been foolish or weak? Have you been despised or considered to be nothing? If you can answer, “Yes,” that is excellent news—you match God’s qualifications perfectly!

You Are God’s First Choice!

PrevPreviousConsider Others
NextWith God All Things Are PossibleNext