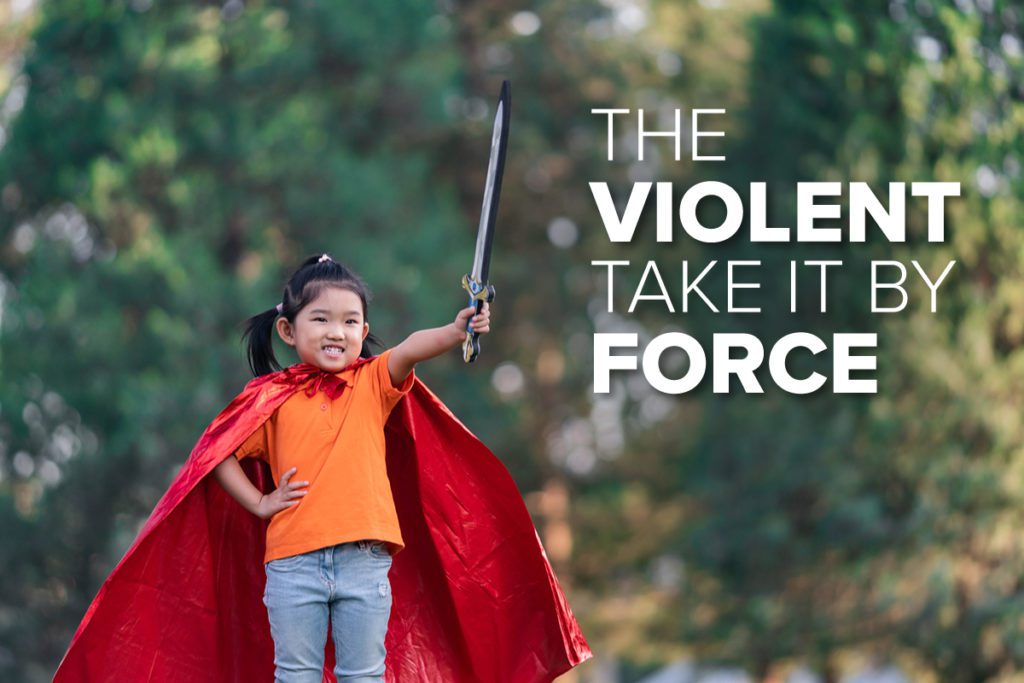 The promises of God, the benefits Jesus died on the cross for you to have, do not happen by accident! If God’s will came to pass automatically, everyone would be healthy. In fact, there would be no evil in the world, and you would live in perfect peace and prosperity. Unfortunately, you live in a fallen world that has been corrupted by sin and suffers the negative effects of the poor choices made by mankind. So, for any promise of God to come to fruition in your life, you have to cooperate with Him in faith and take it by force!

“And from the days of John the Baptist until now the kingdom of heaven suffers violence, and the violent take it by force.“
– Matthew 11:12

When God has given you a promise, you do not have to beg Him for it. It has already been given to you!

When Ashley and Carlie were attending Charis Bible College, Andrew Wommack gave the students an example of this principle.

He said, “I have keys to my brand-new Jeep here,” and he held them up for everyone to see. He continued, “If I said to Ashley, ‘Ashley, here are my car keys. You can use my car today.’ He wouldn’t have to come up to me and beg me, ‘Andrew, please may I borrow your car?’ No, I’ve already told him he could borrow it. He could come and take the keys and use my car.”

Andrew continued teaching the lesson, but all Ashley could think about was the prospect of borrowing that brand-new Jeep! So, after class, Ashley walked up to Andrew, put out his hand and demanded, “Andrew, give me those keys!” Andrew smiled, pulled out the car keys, handed them to Ashley and said, “Bring it back by noon!”

Ashley’s boldness blessed Andrew because he liked that Ashley had believed what he’d said!

In the same way, the Lord has given you so many promises in the Word of God. It is written that He has promised you health, abundance, and purpose. He has already said that He came to give you abundant life, so take it by force!

Examples to Live By

Let’s look at some scriptural examples of people who decided they would violently take what God had provided:

God had already promised the people of Israel the Promised Land. When it had been conquered, and the Israelites were dividing the land among the people, Caleb was ready. He had waited more than forty years for it! He said, “Now therefore, give me this mountain of which the Lord spoke in that day” (Joshua 14:12). Even at the age of 85, Caleb said he was as strong as he had ever been, and he was ready to kick out the giants that were on his property and take it by force!

The woman with the issue of blood was not even supposed to be in town. According to Jewish law, while bleeding, she should have been isolated, as she was considered unclean. Yet, she had been bleeding for twelve years. She had been isolated, in obedience to the law, for twelve years. Her illness had kept her in bondage, and she wanted to be free! She had heard of Jesus, and thought to herself, If I can just touch His clothes, I’ll be healed. So, she pressed her way through the crowd, which was an offense for which she could have been stoned. Yet, she reached out, touched Jesus, and took her healing. (Luke 8:43-48).

One man was brought to Jesus on a stretcher, because he was paralyzed. His four friends could not press into the house from outside because it was so crowded. Instead, they went to the roof and began to tear a hole in it! Lowering their friend down to Jesus, he saw their faith, and their friend was healed. Ripping apart a roof shows some pretty violent faith! (Mark 2:1-12).

The Shunnamite woman, who had been barren, was given a child. However, years later, the young boy died while in the fields with his father. She placed the boy’s body on the bed of the prophet and raced to fetch him. When her husband asked why she was going to see Elisha, she replied, “All is well.” When she arrived at Elisha’s location, she repeated, “All is well.” Yet, she grabbed ahold of the prophet and said, “Did I ask my lord for a son? Did I not say, ‘Do not deceive me?’”

She didn’t wail in accusation, nor beg him to come and heal her child. She merely reminded the prophet of the promise of God that had been given to her. In fact, she found a way to tell him what she needed without even uttering the words, “My son has died.” Elisha went, and the boy was raised from the dead. That brave mother, full of faith, took her son’s healing by force! (2 Kings 4:8-37).

How to Take It by Force

So, what exactly can we learn from these examples of violent believers taking what rightfully belonged to them?

What has God promised you? Ask the Holy Spirit to lead you to scriptures that are what you need to stand on for your situation. Explore our extensive library of free teaching resources on our website. Whether you are believing for healing, financial breakthrough, or success in the calling God has for your life, there is a promise for you!

2. Meditate on the Word

Take the Word of God, those promises the Holy Spirit highlights to you, and meditate on those verses. Study them out: find out what each word means and really dig in to what the Lord is trying to show you through them. Repeat them to yourself throughout your day, think on them, and allow God to speak to you through them.

Your words have power! They have power to work for you or against you, so make the decision to use your words for your benefit. Take those promises of God and declare them. The Bible says that God “calls those things which do not exist as though they did” (Romans 4:17). You have been given the same power. The power of life or death is in your tongue, so use it! (Proverbs 18:21). Life is not a series of “whatever will be, will be” events. As a believer, you don’t have to just sit and take whatever comes your way. Kingdom life is “Yes and amen!” to everything God has provided for you through Jesus Christ. You have hundreds of promises from God, and now is your time to reach out and take them—violently!

The Violent Growth Track is designed to help you set your heart, words and actions on your God-given destiny. Learn to use your faith and actively pursue every promise of God in your life!

Participate in the Violent Growth Track